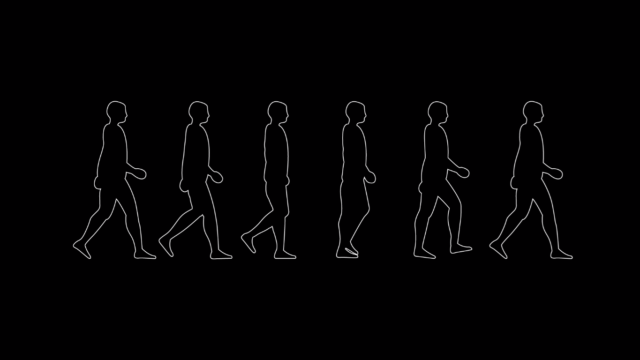 Japanese media artist Akinori Goto designed a brilliant 3D printed ‘Zoetrope’ that, when lit from the side, reveals walking or if you like dancing people. The impressive artwork was on display not so long ago at the Spiral Independent Creators Festival in Japan, where it won various prizes.

Thanks to the creative brains of Goto, the zoetrope sculpture takes on a new dimension. A flavour of 3D printing makes it even more magic. In the video at the top of this post, Goto explains stepwise how he created the same effect for a previous project, named ‘Toki-‘, a sculpture that instead animates a walking figure.

How does it Work?

Goto started by creating a 2D time axis of a figure outline taking  two steps forward. Thereafter, he converts this progression to a 3D axis, placing it onto a vertical plane. That data is translated into a 3D computer graphic and morphed based on the fourth dimension: time.

Then, the model itself was created using 3D printing technologies and placed on a motor-powered rotating platform. After the 3D printing process and the finishing was ready, Goto took a projector and shines onto to the rotating wire grid. Then, a walking person with an elegant leg lift appears and animates a small ballet dancer.

The sculpture was submitted to the 2016 Spiral Independent Creators Festival, an open design competition in Japan. Here, it won both the Runner up Grand Prix and the Audience Award.

Goto has more interesting projects in his portfolio. You can view his extensive collection on his Tumblr website.

All of the Lights Installation by Budmen Industries