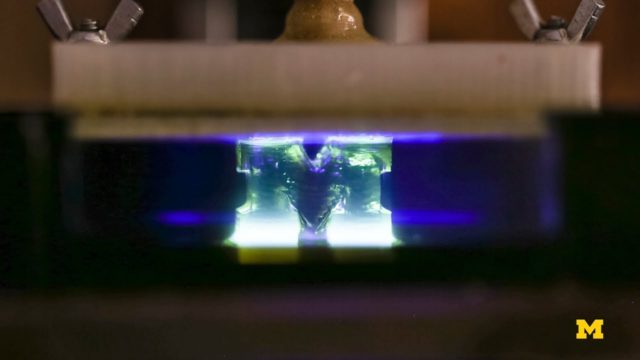 A new, unconventional approach by Michigan University to 3D printing creates stunning results in an up to 100 times faster 3D Printing process. The newly invented methodology was recently reveiled and rather than building up plastic filaments layer-by-layer, it lifts complex geometrical shapes from a bath of liquid resin at up to 100 times faster 3D printing than conventional printing processes do. Here are some deeper insights.

3D Printing: A Game-Changer for Manufacturing

3D printing could potentially change the game for relatively small manufacturing jobs, producing < 10,000 identical parts. It would mean that the objects could be made without the need for a mould tool, coming with a significant upfront investment. But the most familiar forms of 3D printing, which are sort of like building 3D objects with a series of 1D lines, hasn’t been able to fill that gap on typical production timescales of a week or two. Scaling towards larger volumes has only been possible by multiple printers in parallel, each of them duplicating the same approach, what is not very efficient.

As far as we are aware, it’s been thus far only the process of 3D printing optics, that has basically evolved from UV-inkjet printing, that can produce parts at such high speed and has the potential to scale to larger manufacturing quantities. This process, however, is fully tailored for additive fabrication of custom optics and Optographix and does not offer commercial solutions for other markets, as far as we are aware.

The Michigan University method solidifies the liquid resin using two lights to control where the resin cures – and where it stays liquid. This enables the team to solidify the resin in more sophisticated patterns. They can make a 3D bas-relief in a single shot rather than in a series of 1D lines or 2D cross-sections.

By creating a relatively large region where no solidification occurs, thicker resins – potentially with strengthening powder additives – can be used to produce more durable objects. The method also bests the structural integrity of filament 3D printing, as those objects have weak points at the interfaces between layers.

An earlier solution to the solidification-on-window problem was a window that lets oxygen through. The oxygen penetrates into the resin and halts the solidification near the window, leaving a film of fluid that will allow the newly printed surface to be pulled away.

But because this gap is only about as thick as a piece of transparent tape, the resin must be very runny to flow fast enough into the tiny gap between the newly solidified object and the window as the part is pulled up. This has limited vat printing to small, customized products that will be treated relatively gently, such as dental devices and shoe insoles.

By replacing the oxygen with a second light to halt solidification, the Michigan team can produce a much larger gap between the object and the window – thick – allowing the to flow in thousands of times faster.

The Resin: Key to Success

The key to success is – like in many other (3D) printing processes, the chemistry of the resin. In conventional printing systems, there is generally only one material reaction. A hardens the resin wherever light shines. In the newly invented Michigan system, there is also a , which to a different wavelength of light.

Rather than merely controlling solidification in a 2D plane, as current vat-printing techniques do, the Michigan team can pattern the two kinds of light to harden the resin at essentially any 3D place near the illumination window.

As described before, the process invented by Michigan University reminds us very much about the invention of ‘Printoptical Technology’ (3D printed optics) by Luxexcel back in 2009. We are greatly interested to learn whether this novel approach would bring new approaches and/or synergies to the table, especially related to applications in the Lighting Industry. In any case, we will be following the developments around the innovation with great interest!

Video and images courtesy of Evan Dougherty/Michigan Engineering. This post was kindly inspired by a previous publication from Michigan University.

© 2014-2021 - 3DP.Lighting. A blog by Luminous Concepts.
We use cookies to ensure that we give you the best experience on our website. If you continue to use this site we will assume that you are happy with it.OK