Systems for additive manufacturing, or 3D printing as it’s better known, represent just a fraction of the $70 billion traditional machine-tool market worldwide.1 Yet given the likelihood that this technology will start to realize its promise over the next five to ten years, many leading lighting companies seem surprisingly unaware of its potential—and poorly organized to reap the benefits.

3D printing by McKinsey: 40% respondents unfamiliar with AM technology

A McKinsey survey of leading manufacturers earlier this year showed that 40 percent of the respondents were unfamiliar with additive-manufacturing technology “beyond press coverage.” An additional 12 percent indicated that they thought 3D printing might be relevant but needed to learn more about it (Exhibit 1). Many also admitted that their companies were ill prepared to undertake a cross-organizational effort to identify the opportunities. Two-thirds said that their companies lacked a formal, systematic way to catalog and prioritize emerging technologies in general. 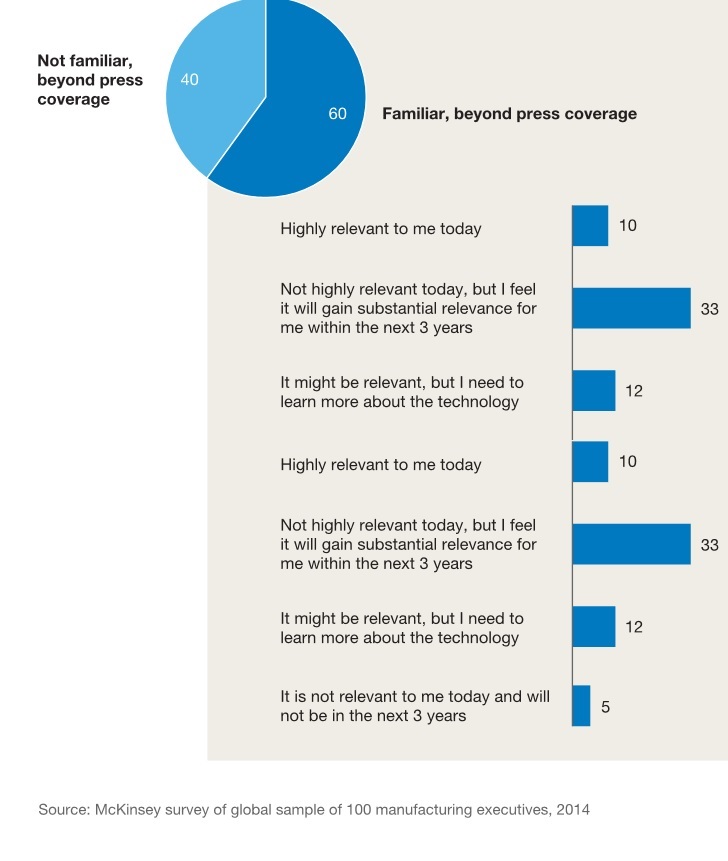 Adoption of 3D printing years ahead

The mass adoption of 3D printing—the production of physical items layer by layer, in much the same way an inkjet printer lays down ink—is probably years rather than months away. The 3D printer industry has enjoyed double-digit growth recently; sales of metal printers, indeed, rose by 75 percent from 2012 to 2013. But expert consensus2 indicates that the market penetration is just a fraction (1 to 10 percent) of what it could be given the wide range of possible 3D applications (Exhibit 2).

Ten percent of the executives in our survey already find the technology “highly relevant.” They see 3D printing’s ability to increase geometric complexity and reduce time to market as the key business benefits, closely followed by reduced tooling and assembly costs. Those who expect to be among the next wave of users were much more likely to cite reducing inventories of spare parts as one of the advantages. Additive manufacturing, in short, seems set to change the way companies bring their products to market and respond to customer needs. But predicting a “tipping point” is difficult.

Closing the gap – traditional vs. new

Much will depend on when and how quickly overall printing costs fall, a development that should narrow the still-yawning gap between the cost of new and traditional manufacturing methods. In sintering-based 3D printing technologies,3 for example, there are two major expense categories. The machines and their maintenance typically account for 40 to 60 percent of total printing costs. The materials used in the manufacturing process can account for 20 to 30 percent when using common materials such as aluminum, or 50 to 80 percent when printing with exotic materials such as titanium. Labor and energy make up the rest.

In all likelihood, prices for sintering-based printers will remain steady or rise in the near term thanks to the introduction of new technical features, such as enhanced automation. But patent expirations and new entrants in Asia should apply downward pressure over the next ten years. The cost of materials ought to drop in the long term as third-party firms become credible alternative powder suppliers and as increased demand for powder enhances scale efficiencies more generally. Throughput rates are expected to increase on the back of growing laser power, higher numbers of lasers, and better projection technology. All of that will serve to reduce expensive machine time.

The McKinsey research on sintering-based printers examined two possibilities: In the “base” scenario, costs remain largely at their present level and companies come to understand the benefits of additive manufacturing only gradually. In the “market shock” scenario, printing costs fall precipitously—say, by 30 or even 50 percent over a ten-year period. Early signs of these cost-shifting dynamics can be seen in plastic sintering. One new Chinese entrant is already selling comparable selective laser-sintering machines at a price 25 to 30 percent below that of a leading Western supplier. Asian players are offering technically comparable nylon powders at prices that are more than 30 percent lower than those of their Western rivals. Price undercutting is less dramatic for nontraditional blends, such as carbon-filled powders used in strong but lightweight parts (those in racing cars, for example).

While there have been false dawns before for 3-D printing as a whole, companies cannot afford to be complacent. That will be especially true if the expected benefits to innovation are not only magnified by cost reductions but also bring into scope whole new industries and product categories. CEOs and COOs above all need to examine the readiness of their companies for a future in which a range of integrated digital technologies (of which 3D could be one of the most significant) will dominate manufacturing and competitors will probably be building additive manufacturing into their value chains. That means focusing on better organizational cohesion and considering partnerships with external organizations (such as local contract-printing bureaus) that have the necessary technical expertise.

Beyond the C-suite, companies should build a group of executive champions within the engineering, quality, operations, and procurement units. Some aerospace and medical-device companies, for example, already have teams scanning their entire design portfolios for parts that could benefit from this technology. Furthermore, the introduction of 3D printing into complex manufacturing environments would require big changes in quality-assurance and control processes: companies would have to replace old protocols relying on extensive up-front testing and validation of traditional production tools, such as molds. Since additive manufacturing reduces or even eliminates the need for these tools, organizations must understand the steps needed to satisfy their quality requirements in the future.

The coming years will bring new opportunities and challenges. Companies with savvy executives who raise awareness, fill talent gaps, and build the necessary organizational capabilities will be well positioned to benefit from this breakthrough technology.