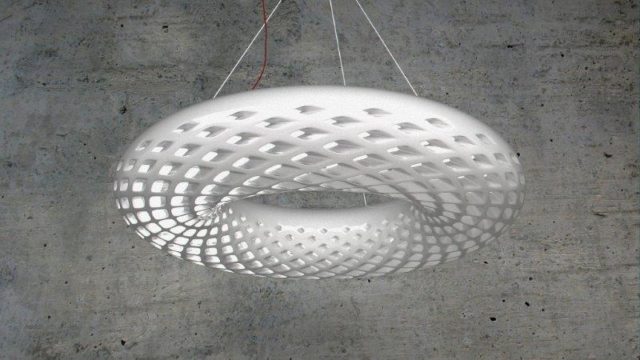 The Avoid Chandelier by digital sculptor Janne Kyttanen is a circular light fixture featuring an intricate diamond structure. When lit, it starts to glow from it’s inner center and spread its beautiful patterned light into the area while creating a wonderful ambiance. The shape is influenced by Lie sphere geometry, a geometrical theory in which the fundamental concept is the sphere. The fixture comes in various finishings, such as copper and chrome, and will be launched in Europe during the Design Basel 2016 event.

Janne Kyttanen is a digital sculptor operating at the intersection of 3D printing, virtual & augmented reality. His multi-disciplinary work has been featured for example in TIME Magazine’s ‘Design 100’. It captures the most influential design in the world from the perspective of leading designers with their ideas.

Kyttanen is best known for his early-staged revolutionary work with 3D printing and is considered to be one of the most influential artist designers of his generation. He resides between his two studios based in Los Angeles and Amsterdam.

The newly generated Avoid Chandelier will be unveiled by Gallery ALL during the upcoming edition of Design Miami / Basel 2016, running this June 14th – 19th in Basel, Switzerland.

Pictures in this post are courtesy of Janne Kyttanen.