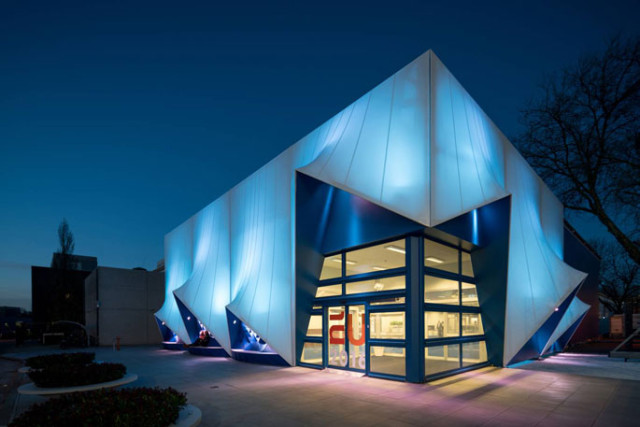 Slightly different from our usual blogposts, but certainly worth sharing: the 3D printed Light Facade for the novel EU Building in Amsterdam. The 2016 EU presidency takes place in the Netherlands for the period of half a year. Starting in January at the Amsterdam Marine Area, EU politicians get together in a mobile ‘Europe Building’ prepared especially for this event. The absolute Eye catcher is the ‘3D Printed Light Facade’ designed by Amsterdam based DUS architects. 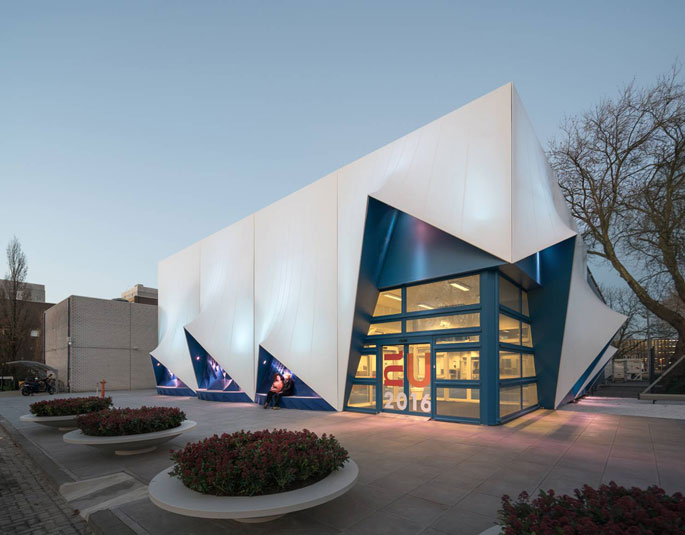 The building’s main entrance is constructed with playfully shaped sails. The sails refer to the many historical sailing ships that are used to be built in this area. The printed patterns comes in a variety of small and large sized shapes, both round and square, and represent the versatility and community of all the different EU countries. At night, the semi-translucent sails are back-lit with a pulsing light. This alcoves, created by the sails, house 3D-printed benches colored in EU-blue.

Every seating is parametrically designed and fits perfectly within the alcove. These prototypes were developed especially for the EU presidency. The prints – made locally with the XXL 3D printer of the 3D Print Canal House project in Amsterdam – are made of a specially developed bio-plastic by Henkel.

The façade has been developed in a very short time span thanks to the close collaboration between various project partners. The fabrication of the prints has been done by Actual, an Amsterdam-based start-up that develops online customizing software for building elements linked to XL 3D printing. The bio-plastic material can be shredded and reprinted after the presidency is over.

Pictures in this post are courtesy of DUS Architects Amsterdam.