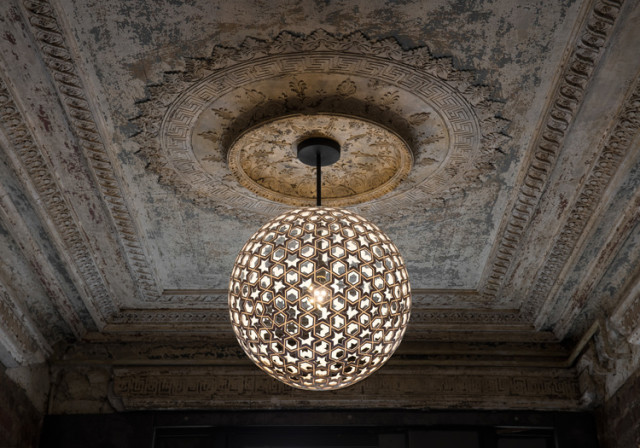 From time to time we spot new designers and artists creating beautiful work by use of 3D printing technologies. Robert Debbane Studio, based in Brooklyn, New York, is one of them. Founded by artist and designer Robert Debbane himself, the studio has created a collection of various lighting designs to date, all of them fabricated on 3D printers. His impressive work reveals a commitment to creating exceptional designs by thinking beyond the limitations associated with 3D printing.

Fusion of Art and Digital Processing

As an artist, Robert has worked in a variety of media including painting, photography, and installation. His interest has always been in the interaction between the traditional way of art-making and novel, digital processes. His experiments with 3D printers started back in 2011, initially as a fabrication tool to use in his art studio. It finally led to the lighting designs he is currently producing in his studio.

ZapDesign included Robert Debbane in their video recap of the ‘WantedDesign’ show.

The inspiration for Robert’s work come from the Islamic tile patterns as found in his ancestral home in Sidon, Lebanon. Also, forms as found in nature and images of outer-space are trending in his masterpieces.

Any of the designs have a sculptural quality when unlit reminiscent of ancient relief sculptures. When illuminating them, the geometric patterns are revealed in a surprising and dramatic way, and create beautiful light and shadow play at the surrounding wall and ceiling areas.

One of his recent works features the new ‘Sidon Chandelier’ project. This chandelier was installed in the lobby of an apartment building in Williamsburg, Brooklyn. Made of 320 interlocking ABS parts, the chandelier uses an innovative and cost efficient LED bulb from Nanoleaf.

The design plays off the geometric patterns in the vintage tin ceiling. It is truly one of the best examples we’ve ever seen of how 3D printed lighting seamlessly fits into the visual style and cultural elements of the ambient room.

More of the work including the various 3D printed lighting designs Robert Debbane Studio has created can be found in the 3D Printing Lighting ‘Inspiration’ area or on Robert Debbane’s website.